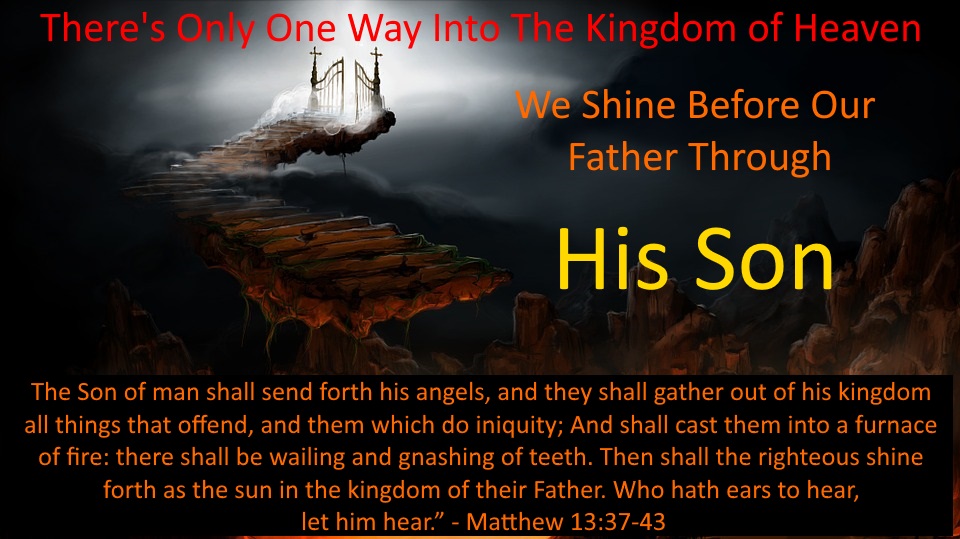 Okay, so bear with me here because there is a lot of Scripture today, in fact, most of the chapter, but it is something that God has asked me to address, so here we go. The kingdom of heaven, the place we will dwell until Jesus is King, this is what being a Christian it is all about. So many religions come up with their own views on how a person can get to heaven, but there is only one way, Jesus Christ. Now, just because Jesus did not walk the earth in the flesh since God created it that does not mean people did not know about Him nor know that He was their only way to heaven, they just knew Him simply as the LORD. There has always been only one way to heaven, we need to be saved to get there, and there has always been only one Saviour. “What shall I render unto the LORD for all his benefits toward me? I will take the cup of salvation, and call upon the name of the LORD.” – Psalm 116:12-13.

A parable is a short story that contains an important message, people often use parables to explain something that one might not understand outright. Since the world is ignorant to the whole concept of heaven and hell, or the better word would be skeptical, Jesus often spoke about it in parables, here is the one regarding seeds that are sown on different types of ground. “And he spake many things unto them in parables, saying, Behold, a sower went forth to sow; And when he sowed, some seeds fell by the way side, and the fowls came and devoured them up: Some fell upon stony places, where they had not much earth: and forthwith they sprung up, because they had no deepness of earth: And when the sun was up, they were scorched; and because they had no root, they withered away. And some fell among thorns; and the thorns sprung up, and choked them: But other fell into good ground, and brought forth fruit, some an hundredfold, some sixtyfold, some thirtyfold.” – Matthew 13:3-8.

“And some fell among thorns;” This is perhaps ninety percent of those whom have gotten saved and walked away from Jesus and God all together. The sower is Jesus, the seed is the Gospel, and the ground is the heart. Jesus explains the parable to His disciples. “When any one heareth the word of the kingdom, and understandeth it not, then cometh the wicked one, and catcheth away that which was sown in his heart. This is he which received seed by the way side. But he that received the seed into stony places, the same is he that heareth the word, and anon with joy receiveth it; Yet hath he not root in himself, but dureth for a while: for when tribulation or persecution ariseth because of the word, by and by he is offended. He also that received seed among the thorns is he that heareth the word; and the care of this world, and the deceitfulness of riches, choke the word, and he becometh unfruitful. But he that received seed into the good ground is he that heareth the word, and understandeth it; which also beareth fruit, and bringeth forth, some an hundredfold, some sixty, some thirty.” – Matthew 13:19-23.

“and the care of this world, and the deceitfulness of riches, choke the word, and he becometh unfruitful.” Again, this is about ninety percent of those who get saved and end up walking away God all together. They are dependent upon the world so when the cares of the world or riches are possible they choose that. Oh, and by the way, this is where a lot of false religions like Scientology comes from, they remove the Word of God and make up their own. It is funny how the religious always pride themselves on their good deeds, but rarely is God involved, yet they still believe they are going to heaven. Now, do not beat yourself up if you do not understand a parable, God does not always reveal things to us when we are first introduced to them in His Word because He waits until we have an open and willing heart to accept them. Jesus often had to explain the parables, even to His disciples, which brings us to another parable about seeds.

“Another parable put he forth unto them, saying, The kingdom of heaven is likened unto a man which sowed good seed in his field: But while men slept, his enemy came and sowed tares among the wheat, and went his way. But when the blade was sprung up, and brought forth fruit, then appeared the tares also. So the servants of the householder came and said unto him, Sir, didst not thou sow good seed in thy field? from whence then hath it tares? He said unto them, An enemy hath done this. The servants said unto him, Wilt thou then that we go and gather them up? But he said, Nay; lest while ye gather up the tares, ye root up also the wheat with them. Let both grow together until the harvest: and in the time of harvest I will say to the reapers, Gather ye together first the tares, and bind them in bundles to burn them: but gather the wheat into my barn.” – Matthew 13:24-30.

“An enemy hath done this.” This time the seeds represent Jesus Himself and the devil, Jesus being the wheat, and the devil being the tares or weeds. Weeds look beautiful, but are in fact, harmful to life. Earlier this year we had beautiful grass without any weeds in it, but our neighbors had weeds growing up all through there’s. They only the grass once a month, but when they did some of the seeds from the weeds blew into our yard and now they are ruining the grass, which is why they must be pulled. This is what happens to those who are trusting in their own works to get them to heaven, they ruin anyone’s hope of getting into heaven, and the fate of those who believe them is devastating. Now, the disciples had a hard time understanding this parable so they asked Jesus to explain.

“He answered and said unto them, He that soweth the good seed is the Son of man; The field is the world; the good seed are the children of the kingdom; but the tares are the children of the wicked one; The enemy that sowed them is the devil; the harvest is the end of the world; and the reapers are the angels. As therefore the tares are gathered and burned in the fire; so shall it be in the end of this world. The Son of man shall send forth his angels, and they shall gather out of his kingdom all things that offend, and them which do iniquity; And shall cast them into a furnace of fire: there shall be wailing and gnashing of teeth. Then shall the righteous shine forth as the sun in the kingdom of their Father. Who hath ears to hear, let him hear.” – Matthew 13:37-43.

“Then shall the righteous shine forth as the sun in the kingdom of their Father.” The righteous are those who are saved, while we in the flesh are imperfect, God looks at the saved through His Son, therefore, we shine in righteousness, and become part of His kingdom. If you ever wondered why God places His own in the midst of the wicked, here is the reason, there are some among us that may believe and be saved. While God does create all things good, and does not want to see anyone end up in hell, all it takes for things to turn bad is the devil corrupting His seed. By the way, the devil cannot give life, but he can corrupt it. Even he had a chance to repent, but chose to put himself above his Creator, and for that reason he and everyone else who follows him will burn in the lake of fire. “And the devil that deceived them was cast into the lake of fire and brimstone, where the beast and the false prophet are, and shall be tormented day and night for ever and ever.” – Revelations 20:10.

A person can read the Bible cover to cover, over and over again, but unless their heart is right they will not see or hear what God is saying. The first and far most thing we need to do to get our heart right is believe the Gospel of Jesus, and receive Him as our Saviour. In doing so we will find out just how valuable our relationship with Jesus really is. Through another set of parables Jesus explains how much those who are saved value their salvation. “Again, the kingdom of heaven is like unto treasure hid in a field; the which when a man hath found, he hideth, and for joy thereof goeth and selleth all that he hath, and buyeth that field. Again, the kingdom of heaven is like unto a merchant man, seeking goodly pearls: Who, when he had found one pearl of great price, went and sold all that he had, and bought it. Again, the kingdom of heaven is like unto a net, that was cast into the sea, and gathered of every kind: Which, when it was full, they drew to shore, and sat down, and gathered the good into vessels, but cast the bad away. So shall it be at the end of the world: the angels shall come forth, and sever the wicked from among the just, And shall cast them into the furnace of fire: there shall be wailing and gnashing of teeth.” – Matthew 13:44-50.

“and for joy thereof goeth and selleth all that he hath,” The most valuable asset we will ever have is our salvation, it is so valuable that heaven itself is decorated with gold and pearls as they are worthless in heaven. We will never full comprehend the value of our salvation until we truly realize just how important it is, and once we do, we really are willing to sell our most valuable possessions on earth because it does not compare, especially when we discover what Jesus is saving us from. “He that overcometh shall inherit all things; and I will be his God, and he shall be my son. But the fearful, and unbelieving, and the abominable, and murderers, and whoremongers, and sorcerers, and idolaters, and all liars, shall have their part in the lake which burneth with fire and brimstone: which is the second death.” – Revelation 21:7,8.

Jesus Christ Magnified: “The Son of man shall send forth his angels, and they shall gather out of his kingdom all things that offend, and them which do iniquity;” – Matthew 13:41.

Today’s Prayer: God, I love the amazing miracle that happens when a seed grows into something beautiful, but I also see the destruction that weeds do to that beauty. Lord, I want to live a life that produce good, sustainable fruit, not corruptible weeds. Give me Your power, wisdom, and guidance to be fruitful, give me an open and willing heart, and let me not be corrupted by the weeds that try to destroy every good fruit You produced in me. In Jesus’ name, Amen.