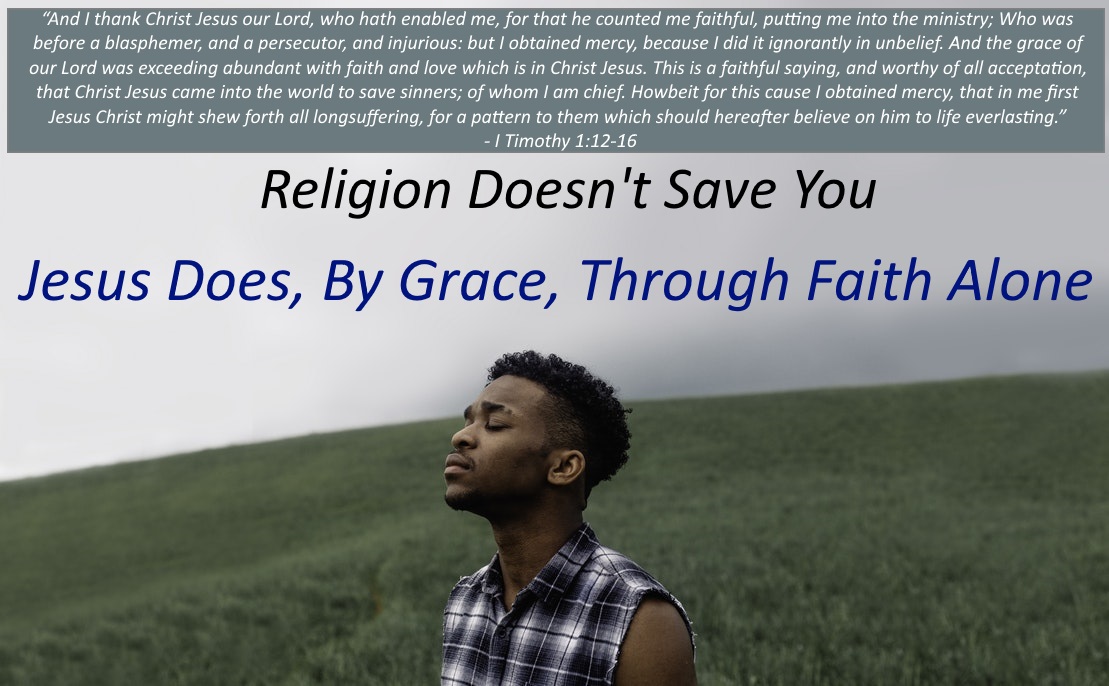 Religion; 1. Any system of faith and worship. 2. As distinct from virtue, or morality, consisting in the performance of the duties we owe directly to God. 3. Godliness or real piety in practice, consisting in the performance of all known duties to God and our fellow men, in obedience to divine command, or from love to God and his law. 4. A belief in the being and perfections of God, in the revelation of his will to man, in man’s obligation to obey his commands, in a state of reward and punishment, and in man’s accountability to God; and also true godliness or piety of life, with the practice of all moral duties.

In other words, man says that religion is the belief something, whether it is of God, a supernatural being, or no being at all, governing the entire world, and our worshiping it. Religion is a system of faith. Religion includes the belief and worship of Pagans, Mohammedans, Hindus, Indians, as well as Christians, and includes false as well as pure worship.

Now, lets see that the Bible says religion is:

“Every good gift and every perfect gift is from above, and cometh down from the Father of lights, with whom is no variableness, neither shadow of turning. Of his own will begat he us with the word of truth, that we should be a kind of firstfruits of his creatures. Wherefore, my beloved brethren, let every man be swift to hear, slow to speak, slow to wrath: For the wrath of man worketh not the righteousness of God. Wherefore lay apart all filthiness and superfluity of naughtiness, and receive with meekness the engrafted word, which is able to save your souls. But be ye doers of the word, and not hearers only, deceiving your own selves. If any man among you seem to be religious, and bridleth not his tongue, but deceiveth his own heart, this man’s religion is vain. Pure religion and undefiled before God and the Father is this, To visit the fatherless and widows in their affliction, and to keep himself unspotted from the world.” – James 1:17-22,26-27.

“and to keep himself unspotted from the world.” Since we belong to God we are to be different than those of the world, we do not blend in with them, we do not live the way they do, and we do not make ourselves the spotlight. Pure religion is believing exactly what the Bible tells us, and doing that. And that includes salvation by grace alone through Jesus Christ our LORD. We must hear His Word and follow it, not add to it, not take from it, not eliminate it all together. Many people base their belief in God according on whatever religion they were brought up in, and just so you understand, there are over 4300 religions, that alone goes to show you that not every way leads to worshiping the one and only living God.

The truth is, there is only One one God, and only one way to God and that is by believing in and accepting that the Lord, Jesus Christ, the Son of God, whom was born of a virgin, died a sinless death on the cross to redeem sinful man, He then was buried in a tomb, and arose three days later so that anyone who believes in Him enjoys eternal life with God. No religion will get you to heaven on your own, no pastor, pope, rabbi, or imam will get you to heaven and God, except Christ. And God is not someone that you can just make up or create an image of all on your own and expect His blessings upon your life. We must believe in Jesus Christ and accept Him alone as our Saviour if we want to get to God and heaven. “Whosoever believeth that Jesus is the Christ is born of God: and every one that loveth him that begat loveth him also that is begotten of him. He that believeth on the Son of God hath the witness in himself: he that believeth not God hath made him a liar; because he believeth not the record that God gave of his Son. And this is the record, that God hath given to us eternal life, and this life is in his Son. He that hath the Son hath life; and he that hath not the Son of God hath not life. These things have I written unto you that believe on the name of the Son of God; that ye may know that ye have eternal life, and that ye may believe on the name of the Son of God.” – I John 5:1,10-13.

God: One God, The Almighty and only living God, in the form of three persons, God the Father, Jesus the Son, and the Holy Spirit. The first person in the Godhead. “But the LORD is the true God, he is the living God, and an everlasting king: at his wrath the earth shall tremble, and the nations shall not be able to abide his indignation. Thus shall ye say unto them, The gods that have not made the heavens and the earth, even they shall perish from the earth, and from under these heavens.” – Jeremiah 10:10,11. “For there are three that bear record in heaven, the Father, the Word, and the Holy Ghost: and these three are one.” -I John 5:7.

Jesus Christ: The second person in the Godhead, the only begotten Son of God, sinless, and perfect, who gave His life on the cross to save sinners. “For God so loved the world, that he gave his only begotten Son, that whosoever believeth in him should not perish, but have everlasting life.”-John 3:16.

The Holy Spirit: The third person in the Godhead, also known as the Holy Ghost, or the Spirit of God, who lives in all who receives Christ as their Saviour. “In whom ye also trusted, after that ye heard the word of truth, the gospel of your salvation: in whom also after that ye believed, ye were sealed with that holy Spirit of promise,” – Ephesians 1:13.

Sin: Any wrongdoing in the eyes of God with the body, mind, or mouth. Sin, rather a sin nature was passed down to all mankind as a result of sin by Adam. “Wherefore, as by one man sin entered into the world, and death by sin; and so death passed upon all men, for that all have sinned:” -Romans 5:12.

Sinner: Everyone except Christ was born with a sin nature, a curse passed down to man from Adam. A sinner is someone who has sinned at least once in their lifetime. “As it is written, There is none righteous, no, not one: There is none that understandeth, there is none that seeketh after God…For all have sinned, and come short of the glory of God;” – Romans 3:10,11,23.

Heaven and Hell: Heaven is the place where God, Jesus, godly angels, and the souls of all those who believe in and receive Christ as their Saviour dwell until they await His Kingdom. All who are receive Christ receive eternal life enter heaven upon the death of the body. Hell is a place of torment and eternal damnation, and all who reject Christ receive eternal death and hell upon the death of the body and a second death into the lake of fire upon their second judgment when Christ returns. “To an inheritance incorruptible, and undefiled, and that fadeth not away, reserved in heaven for you,” – I Peter 1:4. “I am he that liveth, and was dead; and, behold, I am alive for evermore, Amen; and have the keys of hell and of death.”- Revelation 1:18. “And death and hell were cast into the lake of fire. This is the second death.” – Revelation 20:14. “For if God spared not the angels that sinned, but cast them down to hell, and delivered them into chains of darkness, to be reserved unto judgment;” – II Peter 2:4.

The Gospel; Christ’s Death, Burial, & Resurrection: Christ died the sinless Lamb to be the atonement for the sinner, He was buried and arose three days later to end the curse of death and hell passed down to all sinners. Those who believe in and receive Christ as their Saviour receive the gift of salvation (eternal life), and escape the second death. “That if thou shalt confess with thy mouth the Lord Jesus, and shalt believe in thine heart that God hath raised him from the dead, thou shalt be saved. For with the heart man believeth unto righteousness; and with the mouth confession is made unto salvation.” – Romans 10:9,10.

Salvation: Salvation only comes by grace through our faith and acceptance in the Gospel of Christ alone, we are not saved from sin, death, and hell by works of the law, but by believing in the Gospel, receiving Him as our Saviour, and trusting only in Him to save us. “For by grace are ye saved through faith; and that not of yourselves: it is the gift of God: Not of works, lest any man should boast.” -Ephesians 2:8

Eternal Life: Everlasting life is given freely to all who have received Christ as their Saviour, it means forever, sin cannot take it away because we are saved by grace, not works. “For Christ also hath once suffered for sins, the just for the unjust, that he might bring us to God, being put to death in the flesh, but quickened by the Spirit:” – I Peter 3:18.

Baptism: A public profession of faith by a person who has received Christ as their Saviour in which a saved person gets fully immersed in water to declare their faith in Christ. “Therefore we are buried with him by baptism into death: that like as Christ was raised up from the dead by the glory of the Father, even so we also should walk in newness of life. For if we have been planted together in the likeness of his death, we shall be also in the likeness of his resurrection:” -Romans 6:4,5.

Bible: The Word of God, the perfect, infallible words of the only living God, that always has been before the world began, written by Holy Spirit filled men, by the inspiration of God, and was made flesh in the form of Jesus Christ. “In the beginning was the Word, and the Word was with God, and the Word was God. The same was in the beginning with God. All things were made by him; and without him was not any thing made that was made…And the Word was made flesh, and dwelt among us, (and we beheld his glory, the glory as of the only begotten of the Father,) full of grace and truth.” – John 1:1-3,14. “All scripture is given by inspiration of God, and is profitable for doctrine, for reproof, for correction, for instruction in righteousness: That the man of God may be perfect, throughly furnished unto all good works.” – II Timothy 3:16,17.