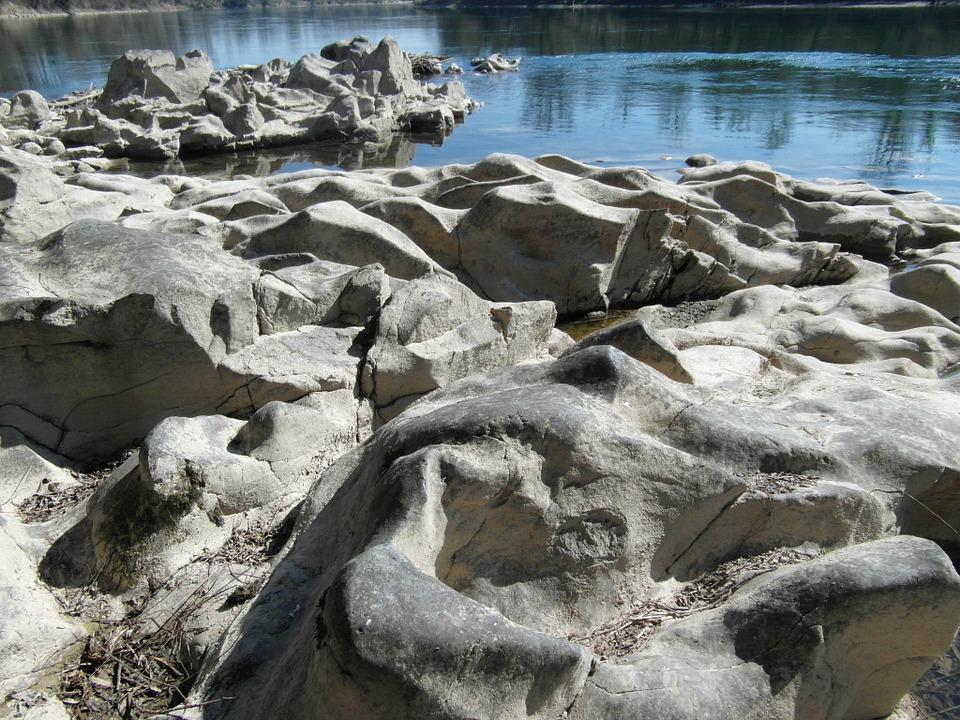 The Ice Age is referred to a time of extensive glacial activity, in which the land is covered by ice. During the Ice Age, which ended several thousand years ago, about thirty percent of the land surface was covered in ice. Scientists have collected mounds of evidence proving that ice once covered most of Canada, parts of the northern and central United States. Evidence is also found in northern Europe, northwest Asia, many of the large mountain ranges of Eurasia, and high mountainous areas of the Southern Hemisphere and tropics.

We know the extent of the Ice Age in the recent past because of similar features today, glaciers. Glaciers are large masses of ice that accumulate from snow over the years and slowly move from a higher place. Glaciers today are also found in formerly glaciated areas, such as lateral and terminal moraines. A lateral moraine is a mound of rocks of all sizes deposited on the side of a moving glacier, while a terminal, or end, moraine is a mound of rocks bulldozed in front of the glacier.

Uniformitarianism is a system often involved in dating of glaciers, but it has not been able to explain the Ice Age, or events related to it. Since ice sheets are not developing and melting today, we have no way to actually observe how they developed in the past. James Hutton (1726-1797), “Scottish geologist. Although controversial at the time, his uniformitarian description of the processes that have shaped the surface of the earth is now accepted as showing that the earth is very much older than had previously been believed.” Between the 1700-1800’s the global Flood, believed by most scientists, was really never proven wrong. However, by the late 1800’s they simply decided they wanted to assume it was just Uniformitarianism instead.

Some people believe they have disproved the infallibility of the Bible in the Ice Age period of the earth. After all, they tell us, the Bible says nothing about the Ice Age so the Bible must be wrong. However, they make one valuable mistake, every event that has taken place over the centuries has been in one way, shape, or form proven in the Bible.

So, how do we know when the Ice Age actually came into play, and how when it is not pointed out directly in the Bible? The same way we proved that the dinosaurs were here with man, we go through the Scriptures and figure out a timeline.

Several Things Happened Right After The Flood to Form The Ice Age
From the description of the flood is Genesis, we can get enough information to form an idea about what the world was like during, and immediately after the flood. “In the six hundredth year of Noah’s life, in the second month, the seventeenth day of the month, the same day were all the fountains of the great deep broken up, and the windows of heaven were opened. And the rain was upon the earth forty days and forty nights. In the selfsame day entered Noah, and Shem, and Ham, and Japheth, the sons of Noah, and Noah’s wife, and the three wives of his sons with them, into the ark; They, and every beast after his kind, and all the cattle after their kind, and every creeping thing that creepeth upon the earth after his kind, and every fowl after his kind, every bird of every sort. And they went in unto Noah into the ark, two and two of all flesh, wherein is the breath of life. And they that went in, went in male and female of all flesh, as God had commanded him: and the LORD shut him in. And the flood was forty days upon the earth; and the waters increased, and bare up the ark, and it was lift up above the earth. And the waters prevailed, and were increased greatly upon the earth; and the ark went upon the face of the waters. And the waters prevailed exceedingly upon the earth; and all the high hills, that were under the whole heaven, were covered. Fifteen cubits upward did the waters prevail; and the mountains were covered.” – Genesis 7:11-20.

“he same day were all the fountains of the great deep broken up,” This fountains of the deep are the oceans, rivers, and springs that watered the earth at that time. They literally had broken up, came up out of their place and covered the earth. This caused earth quakes, tidal waves, corrosion, volcano’s to erupt, and other catastrophic events, including the separation of the earths crust, which is why we have seven continents on the earth.

“and the windows of heaven were opened.” This means that it also rained for the first time, and for forty days and nights straight. Do you see what happens when it downpours after a just a few days, imagine what it would be like all over the world for forty straight days.

“and it was lift up above the earth.” As the waters continued to cover the earth, the ark moved up along with it.

“and the mountains were covered.” The hills and mountains were also covered in water. The water was so high that it reached twenty feet higher than the highest mountain in all the world. The only thing that was left on the earth was the ark with the people and animals in it floating on top of that massive flood.

“And every living substance was destroyed which was upon the face of the ground, both man, and cattle, and the creeping things, and the fowl of the heaven; and they were destroyed from the earth: and Noah only remained alive, and they that were with him in the ark. And the waters prevailed upon the earth an hundred and fifty days.” – Genesis 7:23,24.

Embedded within the sedimentary rocks is evidence of incredible volcanic activity that has no parallel today. Unusually thick layers of volcanic flows and ash interlayer sedimentary rocks fit the worldwide Flood paradigm very well. It appears that at the end of the Flood the world was covered by huge volumes of volcanic ash and gas that had spewed into the atmosphere. The abundant ash and gas trapped in the stratosphere would act as an “anti-greenhouse”. Instead of warming the earth, it would reflect sunlight back into space and cool it. At the same time, infrared radiation would continue to escape the earth. Scientists recognize that volcanic dust and gas can substantially cool the earth. Large modern eruptions usually cool a region or hemisphere a degree or two Fahrenheit. The cooling normally lasts one to three years as the ash and gases slowly fall out of the stratosphere.

The extensive volcanism that would result from a worldwide Flood would have a much greater impact on the climate than in historical times. Volcanic ash and gases from the Flood would probably take at least three years to fall out. Three years would be enough time to start an Ice Age. The eruptions would need to continue for many years after the Flood to sustain it. Geologists recognize that there was extensive volcanic activity during the Ice Age. Extensive summer cooling of the land is the first requirement needed for an ice age to develop. High snowfall is the second. Cooling alone cannot generate more precipitation, since cold air holds less moisture, not more. This is the major reason why uniformitarian Ice Age theories fail. In the Ice Age model after the Flood, the abundant moisture needed for an ice age would be produced by evaporation from a warm ocean at mid and high latitudes.

Why Would The Oceans Be Warm?
First, pre-flood ocean temperature was warmer than now. Secondly, if the water from the fountains of the great deep came from within the earth’s crust, much hotter water would be added to the ocean. The earth’s crust warms about 10°f per 1,000 feet depth. If the water for the fountains came from 3,000 feet, it would be quite warm. If it came from 10,000 or more feet the water would have been really hot. Third, intense tectonic activity during the flood and lava flows would add more heat. Earthquakes and rapid ocean currents during the flood would mix this warm water with the pre-flood ocean.

The importance of warm surface water temperatures is that the warmer the water the greater the evaporation. For example, if all other variables remain constant, water evaporates three times faster at an ocean temperature of 86°F (30°C) than at 50°F (10°C), and seven times faster than at 32°F (0°C). So, a universally warm ocean would generate a high amount of evaporation.

The flood and its aftershocks provide the volcanic dust and gases that bring the summer cooling indispensable for the Ice Age. Water from the fountains of the great deep and mixing during the flood provides a warm ocean. In the mid and high latitudes the warm ocean would cause copious evaporation and produce massive amounts of snow. The two ingredients required for an Ice Age, cool temperatures and tons of snow, were dramatically fulfilled immediately after the Genesis flood. This unique climate would persist for hundreds of years after the flood as the intensity of the two mechanisms slowly decreased.

Since the Flood offers a viable explanation for the Ice Age, one could expect that the Ice Age would be mentioned in the Bible. God back to the Book of Job, God Himself gives references to the Ice Age, written about 500 years or so after the Flood.

“Out of whose womb came the ice? and the hoary frost of heaven, who hath gendered it? The waters are hid as with a stone, and the face of the deep is frozen.” – Job 38:29,30.

The reason the Ice Age is not directly discussed in the Bible is probably because the Scandinavian ice sheet and mountain ice caps were farther north than the region where the Bible was written. Only an increase in the snow coverage of Mt. Hermon and possibly more frequent snowfalls on the high areas of the Middle East would have been evident to those living in Palestine.

The Ice Age is readily explained by the climatic consequences of the Genesis Flood, which lasted about 700 years, and there was only one Ice Age. We do not need to believe that it was a hundred thousand years for one ice age, or the few million years for multiple ice ages, as claimed by uniformitarian scientists. Even their claim of ancient ice ages in the hard rocks can be accounted for by gigantic submarine landslides during the Flood. The post-Flood rapid Ice Age accounts for a number of major mysteries that occurred during the Ice Age, such as the Lake Missoula flood and the life and death of the woolly mammoths in Alaska, Siberia, and elsewhere.

Some people are just forever seeking to find something that they can claim disproves the Bible. In this regard, we can draw one conclusion, professing themselves wise they became fools.“For the invisible things of him from the creation of the world are clearly seen, being understood by the things that are made, even his eternal power and Godhead; so that they are without excuse: Because that, when they knew God, they glorified him not as God, neither were thankful; but became vain in their imaginations, and their foolish heart was darkened. Professing themselves to be wise, they became fools, And changed the glory of the uncorruptible God into an image made like to corruptible man, and to birds, and fourfooted beasts, and creeping things. Wherefore God also gave them up to uncleanness through the lusts of their own hearts, to dishonour their own bodies between themselves: Who changed the truth of God into a lie, and worshipped and served the creature more than the Creator, who is blessed for ever. Amen.” – Romans 1:20-25.