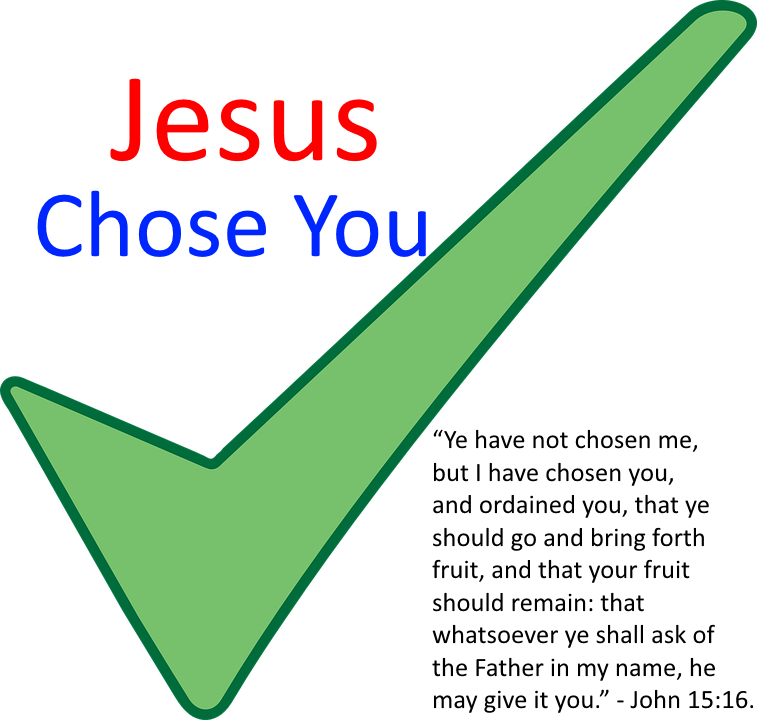 Did you ever feel like an outsider, like you never fit in no matter what group of people you get around, even among Christians? Well, there is a reason why you do not fit in, and no you are not strange, look funny, or have some weird trait that people avoid you. You are set apart, chosen by Christ Himself to serve Him, and there are just some people, including Christians, that could hinder you so you look odd to them rather than one of them. Chosen, Select; distinguished by preference; eminent. When you chose to receive the Lord Jesus Christ as your Saviour Jesus already chose you and set you apart for His service. “Ye have not chosen me, but I have chosen you, and ordained you, that ye should go and bring forth fruit, and that your fruit should remain: that whatsoever ye shall ask of the Father in my name, he may give it you. These things I command you, that ye love one another. If the world hate you, ye know that it hated me before it hated you. If ye were of the world, the world would love his own: but because ye are not of the world, but I have chosen you out of the world, therefore the world hateth you.” – John 15:16-19.

I rarely fit in wherever I went, even before I was saved and living my life for Christ, I even tried to live like the world for a while and all it did was take me down a path that I did not know who I was anymore. Then once I dedicated my life to Christ I realized why I never fit in with the world, I was never one of them. When you are chosen by Christ you stand out, and let me tell you, He will take you down paths that can be quite scary. Paul was a Jew before he got saved, immediately baptized, and started preaching Jesus. Now after serving Christ for some time he was convinced he was to go to Jerusalem to die there as Jesus did, while in Troas he speaks to the people, reminding them that there are still souls to be saved, and a warning that the wolves are coming.

“And now, behold, I know that ye all, among whom I have gone preaching the kingdom of God, shall see my face no more. Wherefore I take you to record this day, that I am pure from the blood of all men. For I have not shunned to declare unto you all the counsel of God. Take heed therefore unto yourselves, and to all the flock, over the which the Holy Ghost hath made you overseers, to feed the church of God, which he hath purchased with his own blood. For I know this, that after my departing shall grievous wolves enter in among you, not sparing the flock. Also of your own selves shall men arise, speaking perverse things, to draw away disciples after them. Therefore watch, and remember, that by the space of three years I ceased not to warn every one night and day with tears.” – Acts 20:25-31.

“which he hath purchased with his own blood.” Jesus is the head of the Christian Church, at least the one that solely believes the Gospel and receives Him as their Saviour. Do not be fooled by churches disguised to look like they know Christ, they do not even preach repentance for sin through Christ alone. As Paul arrived in Jerusalem he was greeted by James and some of the elders of the Jewish temple, and he did not get a good welcome.

“And when he had saluted them, he declared particularly what things God had wrought among the Gentiles by his ministry. And when they heard it, they glorified the Lord, and said unto him, Thou seest, brother, how many thousands of Jews there are which believe; and they are all zealous of the law: And they are informed of thee, that thou teachest all the Jews which are among the Gentiles to forsake Moses, saying that they ought not to circumcise their children, neither to walk after the customs. What is it therefore? the multitude must needs come together: for they will hear that thou art come. Do therefore this that we say to thee: We have four men which have a vow on them; Them take, and purify thyself with them, and be at charges with them, that they may shave their heads: and all may know that those things, whereof they were informed concerning thee, are nothing; but that thou thyself also walkest orderly, and keepest the law.” – Acts 21:19-24.

“Do therefore this that we say to thee:” These were Jews that were saved, but still following ceremonial law, they were appalled that not only did he preach the Gospel to the Gentiles, but he did not teach them ceremonial law along with it. They convince Paul to go through a purifying ceremony in order to enter the temple and be accepted of them. When Jesus went to the cross He took the need for any ceremonial laws regarding purification with Him, the second we receive Christ as our Saviour, He cleanses us with His blood, making us able to serve Him as He wants to use us. “But ye are a chosen generation, a royal priesthood, an holy nation, a peculiar people; that ye should shew forth the praises of him who hath called you out of darkness into his marvellous light:” – I Peter 2:9.

An uproar began when the unbelieving Jews started causing problems, telling them that he was preaching Jesus to the Gentiles. Paul stands before the council and gives his testimony how he came to believe, accept Christ, and serve Him. “And it came to pass, that, when I was come again to Jerusalem, even while I prayed in the temple, I was in a trance; And saw him saying unto me, Make haste, and get thee quickly out of Jerusalem: for they will not receive thy testimony concerning me. And I said, Lord, they know that I imprisoned and beat in every synagogue them that believed on thee: And when the blood of thy martyr Stephen was shed, I also was standing by, and consenting unto his death, and kept the raiment of them that slew him. And he said unto me, Depart: for I will send thee far hence unto the Gentiles. And they gave him audience unto this word, and then lifted up their voices, and said, Away with such a fellow from the earth: for it is not fit that he should live.” – Acts 22:17-22.

“Away with such a fellow from the earth:” You can preach about anything, but preach Jesus to corrupt Jews or Muslims and they will kill you before they allow you to get the truth out to those who are captive to their religion. Christian prosecution has always been a factor, but it is becoming more prominent and deadly as it was in the beginning in certain countries. It is sad, but that is the reality and is only going to get worse the closer to Jesus returning. The unbelieving always want to stop their followers from knowing the truth, and while in some cases it is wise to remain silent in how we preach the Gospel, we are to never be ashamed to be a witness and testimony for Christ. “If ye be reproached for the name of Christ, happy are ye; for the spirit of glory and of God resteth upon you: on their part he is evil spoken of, but on your part he is glorified. But let none of you suffer as a murderer, or as a thief, or as an evildoer, or as a busybody in other men’s matters. Yet if any man suffer as a Christian, let him not be ashamed; but let him glorify God on this behalf.” – I Peter 4:14-16.

Jesus Christ Magnified: “And I said, What shall I do, Lord? And the Lord said unto me, Arise, and go into Damascus; and there it shall be told thee of all things which are appointed for thee to do.” – Acts 22:10.

Today’s Prayer: Jesus, You chose me, I did not choose You, but You chose me, all because I knew something was missing in my life and it was nothing the world had to offer. Although I try to follow Your will I know that there are times where I am out of it, but also know that Your grace is efficient enough for me. Lord, lead me and guide me, help me to make the right decisions and to understand when You are simply trying to tell me that I need to stop what I have determined in my own will to do. I know I can do and endure all things through You as I keep my eyes and focus on Your work. I love You Lord and pray in Your name, Jesus. Amen.