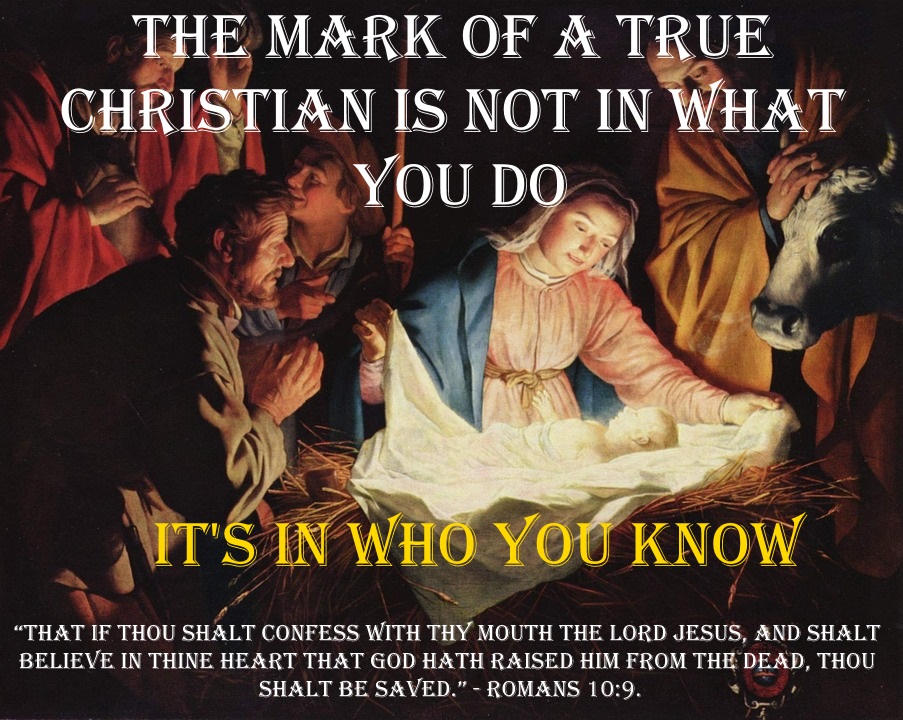 A few years back, there was a Christian woman who somehow got herself in the middle of a Muslim prayer meeting, ironically held in a Catholic church. She stood up and boldly started preaching the Gospel, of course, she was forced out of the church, but the question came up of whether it was right for them to even hold their prayer meeting in a church that proclaims Christ, who is God. Reject Christ all you want, but He is the only God who values life, He values every soul he creates, so much so, that He sacrificed His own life in the form of His Son. “To wit, that God was in Christ, reconciling the world unto himself, not imputing their trespasses unto them; and hath committed unto us the word of reconciliation. For he hath made him to be sin for us, who knew no sin; that we might be made the righteousness of God in him.” – II Corinthians 5:19,21.

Religion often paints the picture that God does not want a one on one relationship with you, that you have to channel your way through so called holy men and they will speak to God your behalf. Of course, this has all been distorted, and while we do need a holy man to speak on our behalf, God wants a one on one relationship with us, and there is only one, man who can speak on our behalf, Jesus Christ. Paul wrote to the Romans while he was in Corinth, he heard about their faith in the Gospel, but they were intermixing the Gospel with faith, Paul sets the record straight first by reminding them that, whether Jew or Gentile, we are all were under the same law, but now we have Jesus, who manifested of the seed of David, replaced the need for the law of works with the law of faith.

“Concerning his Son Jesus Christ our Lord, which was made of the seed of David according to the flesh; And declared to be the Son of God with power, according to the spirit of holiness, by the resurrection from the dead: By whom we have received grace and apostleship, for obedience to the faith among all nations, for his name: Among whom are ye also the called of Jesus Christ: To all that be in Rome, beloved of God, called to be saints: Grace to you and peace from God our Father, and the Lord Jesus Christ. For I am not ashamed of the gospel of Christ: for it is the power of God unto salvation to every one that believeth; to the Jew first, and also to the Greek. For therein is the righteousness of God revealed from faith to faith: as it is written, The just shall live by faith.” – Romans 1:3-7,16-17.

“Among whom are ye also the called of Jesus Christ:” I grew up Catholic and have to say I never understood it one bit, but as I began reading and studying the Bible I get where they got some of their beliefs and rules from, too bad they are among many other religions who thought it necessary to make up their own rules making it impossible for anyone to be saved. Salvation has never been about following every rule written in the Bible in order to get to heaven, and it has never been about countless animal sacrifices to be redeemed because not one person is capable of following every command. It has been about realizing that you are a sinner and without the LORD there is no life. Religion judges people and tells them if they do not follow their rules they are doomed for hell, Jesus teaches us that we are all doomed for hell because we all sin.

“And thinkest thou this, O man, that judgest them which do such things, and doest the same, that thou shalt escape the judgment of God? Or despisest thou the riches of his goodness and forbearance and longsuffering; not knowing that the goodness of God leadeth thee to repentance? But after thy hardness and impenitent heart treasurest up unto thyself wrath against the day of wrath and revelation of the righteous judgment of God; Who will render to every man according to his deeds: To them who by patient continuance in well doing seek for glory and honour and immortality, eternal life: But unto them that are contentious, and do not obey the truth, but obey unrighteousness, indignation and wrath, Tribulation and anguish, upon every soul of man that doeth evil, of the Jew first, and also of the Gentile; But glory, honour, and peace, to every man that worketh good, to the Jew first, and also to the Gentile: For there is no respect of persons with God.” – Romans 2:3-11.

“upon every soul of man that doeth evil,” The soul, a saved soul is so much different than one that is not, it contains the Spirit of God and that means it is alive, and that it is immortal, meaning it will never die no matter what we do to our body. The flesh on the other hand is not immortal, but when Christ returns all who accepted Him as their Saviour will receive a new, glorified, immortal body as it reunites with its soul. Saved or not, we will all stand before Christ, and if we are saved our judgment comes before we leave this earth. Religious rules put us under the law and if we are all under the law we are guilty of breaking it at some point.

“Now we know that what things soever the law saith, it saith to them who are under the law: that every mouth may be stopped, and all the world may become guilty before God. Therefore by the deeds of the law there shall no flesh be justified in his sight: for by the law is the knowledge of sin. But now the righteousness of God without the law is manifested, being witnessed by the law and the prophets; Even the righteousness of God which is by faith of Jesus Christ unto all and upon all them that believe: for there is no difference: For all have sinned, and come short of the glory of God; Being justified freely by his grace through the redemption that is in Christ Jesus: Whom God hath set forth to be a propitiation through faith in his blood, to declare his righteousness for the remission of sins that are past, through the forbearance of God; To declare, I say, at this time his righteousness: that he might be just, and the justifier of him which believeth in Jesus.” – Romans 3:19-26.

“for by the law is the knowledge of sin.” The law acknowledges that we are sinners, and it does not matter what the sin, we are all under the law so the person who told a lie and the person who murdered someone receives the same punishment. However, Jesus, through His sinless death, burial, and resurrection broke the need to follow the law with His blood. Now, all who believe in and receive Him as their Saviour are automatically redeemed, set free from the law, and justified of every sin, so the liar and the murderer receive the same grace. Human comprehension never understands how someone so evil can receive eternal life and someone so good can end up in hell, but again salvation has never been about works, it us all about faith. Paul explains this using Abraham as an example, who never even knew Jesus, but was justified by faith over his works.

“What shall we say then that Abraham our father, as pertaining to the flesh, hath found? For if Abraham were justified by works, he hath whereof to glory; but not before God. For what saith the scripture? Abraham believed God, and it was counted unto him for righteousness. For the promise, that he should be the heir of the world, was not to Abraham, or to his seed, through the law, but through the righteousness of faith. For if they which are of the law be heirs, faith is made void, and the promise made of none effect: Because the law worketh wrath: for where no law is, there is no transgression. Therefore it is of faith, that it might be by grace; to the end the promise might be sure to all the seed; not to that only which is of the law, but to that also which is of the faith of Abraham; who is the father of us all, He staggered not at the promise of God through unbelief; but was strong in faith, giving glory to God;” – Romans 4:1-3,13-16,20.

“to the end the promise might be sure to all the seed;” Grace, the unmerited pardon from punishment for sin. God has determined that it is not what we do for Him or anyone else that shows us righteous before Him, but only by believing in what He Son did for us. it is only by the grace of God that our faith and trust in the Lord, Jesus Christ keeps us from being cast into a fiery burning hell when we die as punishment for our sins. If we want a relationship with God we need Jesus, there is no other way around it, and to reject Him is to reject God. “He that believeth on the Son of God hath the witness in himself: he that believeth not God hath made him a liar; because he believeth not the record that God gave of his Son. And this is the record, that God hath given to us eternal life, and this life is in his Son. He that hath the Son hath life; and he that hath not the Son of God hath not life.” – I John 5:10-12.

Jesus Christ Magnified: “For I am not ashamed of the gospel of Christ: for it is the power of God unto salvation to every one that believeth; to the Jew first, and also to the Greek.” – Romans 1:16.

Today’s Prayer: Jesus, You deserve all the glory, honor, and power for redeeming my soul when I received You as my Saviour for my salvation was only made possible by Your death, burial, and resurrection. While we were still powerless and dead in our sins, You died for us. God, You demonstrated Your love for us, in that we are seen as righteous before You and justified from our sin debt through Your Son. Your wondrous love is truly amazing and we can only respond by becoming living sacrifices for You, not under the Law or good works, but as gratitude for what You have done for us. In Jesus’ name. Amen.