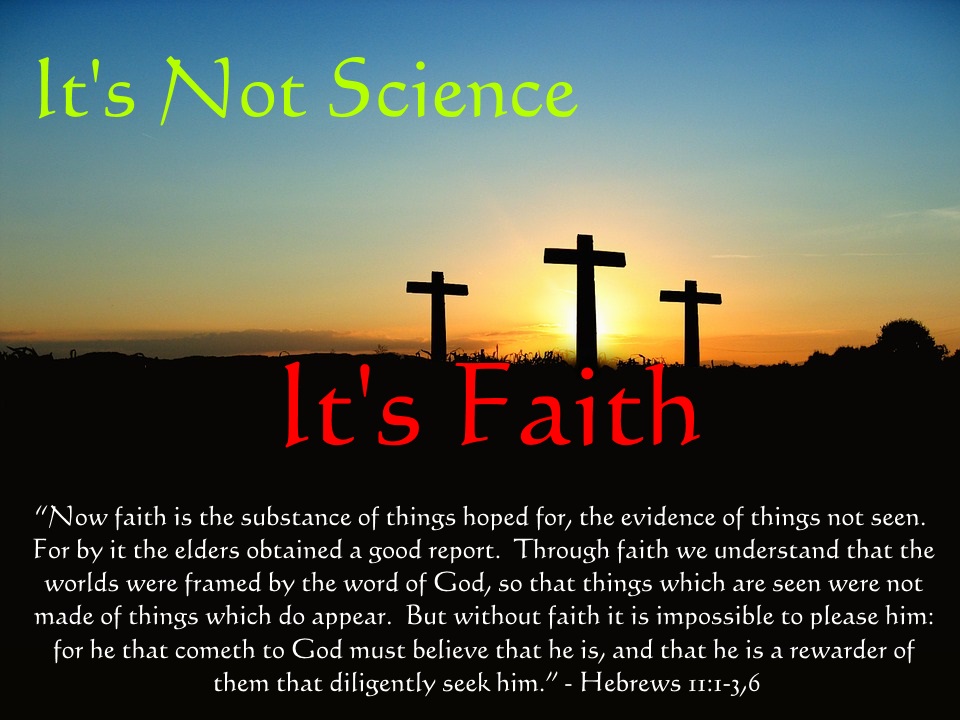 Did you ever stop to look at how the moon is just suspended in the sky? How, even though it circles the earth all day long it stays in its place? The same goes for the sun, if it were one centimeter to close it would burn the earth, and if it were too far the earth would freeze. Scientists have been trying to discover these amazing things since God created the universe, and while they like to talk themselves into believing they have all the answers or deny that the Almighty God designed it all, they cannot change the fact that God controls it all.

“For the invisible things of him from the creation of the world are clearly seen, being understood by the things that are made, even his eternal power and Godhead; so that they are without excuse: Because that, when they knew God, they glorified him not as God, neither were thankful; but became vain in their imaginations, and their foolish heart was darkened.” – Romans 1:20-21.

Science really is an amazing thing because it teaches us so many things about so many things, is used to find cures for diseases and make our lives easier, but science can never explain things that only faith can. While Elihu was speaking something was going on, a storm, which was probably why he talked about the forces of the weather and how God controls it, in the midst of the storm a tornado appears and out of it comes the voice of God. God finally answered Job, but He had some questions for him.

“Then the LORD answered Job out of the whirlwind, and said, Who is this that darkeneth counsel by words without knowledge? Gird up now thy loins like a man; for I will demand of thee, and answer thou me. Where wast thou when I laid the foundations of the earth? declare, if thou hast understanding. Who hath laid the measures thereof, if thou knowest? or who hath stretched the line upon it? Whereupon are the foundations thereof fastened? or who laid the corner stone thereof; When the morning stars sang together, and all the sons of God shouted for joy?” – Job 38:1-7.

“Gird up now thy loins like a man;” Gird; To bind with a cord. Men use to wear tunics before pants came into existence, whenever they had to be ready for battle they used a cord to tie them up like pants so they could run. God wants Job to stop whining about the circumstance and be a man. Of course, God knew that there was no way that Job could answer any of these questions, but wanted him to see that there are some things that cannot be explained. It is ridiculous what all these scientists come up with to try and figure out how God created everything. God will never reveal such information because He knows they will distort it even more than they already have. It is not science, it is faith. “For therein is the righteousness of God revealed from faith to faith: as it is written, The just shall live by faith.” – Romans 1:17.

Science wants to find an answer and solution to every problem, and sure those who have cancer want a cure, but science can never explain diseases in the first place. We cannot possibly know everything God has done or the reason why those who live godly lives die from diseases, we just have to trust Him and have faith that He will get us through them. As God continues to ask Job more questions, but He does answer some questions.

“Hast thou commanded the morning since thy days; and caused the dayspring to know his place; That it might take hold of the ends of the earth, that the wicked might be shaken out of it? It is turned as clay to the seal; and they stand as a garment. And from the wicked their light is withholden, and the high arm shall be broken. Hast thou entered into the springs of the sea? or hast thou walked in the search of the depth? Have the gates of death been opened unto thee? or hast thou seen the doors of the shadow of death? Hast thou perceived the breadth of the earth? declare if thou knowest it all.” – Job 38:12-18.

“And from the wicked their light is withholden,” God may allow the wicked (unsaved) to prosper for a time, but once they leave the earth it is over. Some people live their lives wild and careless because they think that when they leave here there is no where else to go, but that is not true. While the righteous (saved) do suffer here, they will not suffer when they see Jesus face to face, but the wicked will. “He that overcometh shall inherit all things; and I will be his God, and he shall be my son. But the fearful, and unbelieving, and the abominable, and murderers, and whoremongers, and sorcerers, and idolaters, and all liars, shall have their part in the lake which burneth with fire and brimstone: which is the second death.” – Revelation 21:7-8.

God’s creatures, there are some very fascinating and strange species that He created, and every one of them designed for a purpose and has a place in this world. Science would like you to believe that animals evolve over time and that they have developed or went out of existence because they were stronger or weaker than some. There are some instances where these things are true, for instance animals learn to adapt to their environment and so so people, but they in no way change their form into another specie. God goes on to talk about His creatures, how he designed everyone of them, and what little man knows about His creation.

“Will the unicorn be willing to serve thee, or abide by thy crib? Canst thou bind the unicorn with his band in the furrow? or will he harrow the valleys after thee? Wilt thou trust him, because his strength is great? or wilt thou leave thy labour to him? Wilt thou believe him, that he will bring home thy seed, and gather it into thy barn? Gavest thou the goodly wings unto the peacocks? or wings and feathers unto the ostrich? Which leaveth her eggs in the earth, and warmeth them in dust, And forgetteth that the foot may crush them, or that the wild beast may break them. She is hardened against her young ones, as though they were not hers: her labour is in vain without fear; Because God hath deprived her of wisdom, neither hath he imparted to her understanding.” – Job 37:9-17.

“Because God hath deprived her of wisdom,” Animals do what that do naturally the way God designed them, the unicorn (rhino), as strong as he is, was never designed to help man with daily labors as say a horse would, the peacock, so beautiful when he struts and shows off his feathers with such pride, and the ostrich, what a strange creature, yet all of these creatures are an example of God’s design and only He has a purpose for what He makes. When we realize God’s wonderful works of nature, and how every one of them are fitted for the services in which they were designed, we see we are not as smart as we think we are, and that life is not about science, it is about faith. “Now faith is the substance of things hoped for, the evidence of things not seen. For by it the elders obtained a good report. Through faith we understand that the worlds were framed by the word of God, so that things which are seen were not made of things which do appear. But without faith it is impossible to please him: for he that cometh to God must believe that he is, and that he is a rewarder of them that diligently seek him.” – Hebrews 11:1-3,6.

Jesus Christ Magnified: “Hast thou entered into the treasures of the snow? or hast thou seen the treasures of the hail, Which I have reserved against the time of trouble, against the day of battle and war?” – Job 38:22-23. One day Jesus will return and all the elements of the earth will be used in an ultimate battle of good verses evil where Jesus will destroy the devil and all evil forever.

Today’s Prayer: God, No matter how much I believe that my circumstances are only temporary and that You will take care of me through them I still let them control me sometimes. I want to take control of my circumstances, but giving them all over to You. I know that You are the only one who can help me endure and give me real purpose. As I do my part, trusting You and having faith and hope in You, I know I will figure out Your purpose for me. In Jesus’ name. Amen.