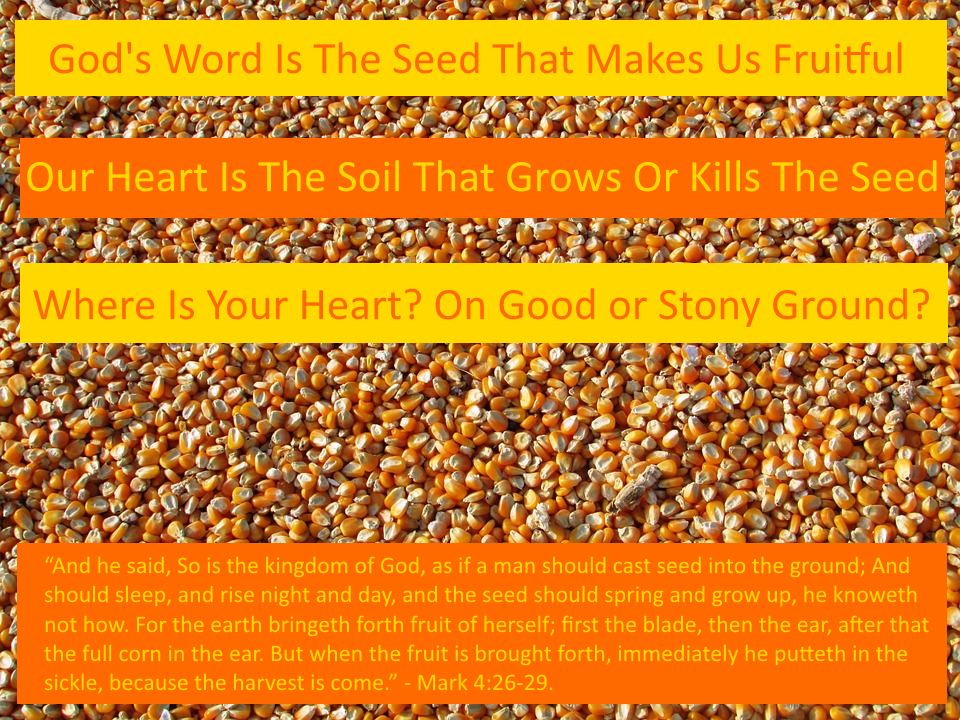 The key to being good grounded Christian is believing in the Word of God, we must believe that every single word written is true. Why is this important? To become fruitful. Discrediting Him for one thing means discrediting Him for all the things. People flocked to hear Jesus preach, there were so many people that He got into a ship in the water so that all could see Him. Now, some may have believed what He was preaching, but the majority of them do what many people do when they are sitting in a pew, just sit there, not really hearing the message, and this was why Jesus often spoke in parables, those really listening would hear what He was saying. Once again we read about the parable of the seed, which is the Word of God being thrown on different soils, the soils representing the hearts of people. Mark goes a little further and explains the miracle of a seed growing.

“And he said, So is the kingdom of God, as if a man should cast seed into the ground; And should sleep, and rise night and day, and the seed should spring and grow up, he knoweth not how. For the earth bringeth forth fruit of herself; first the blade, then the ear, after that the full corn in the ear. But when the fruit is brought forth, immediately he putteth in the sickle, because the harvest is come.” – Mark 4:26-29.

“For the earth bringeth forth fruit of herself;” Within every heart lies its true desires, and whatever those desires are they are what produces the fruit that comes out of it. People do not become thorny Christians over night, it happens gradually as they allow the world to seep in because of the desires of the heart. “The backslider in heart shall be filled with his own ways: and a good man shall be satisfied from himself. A sound heart is the life of the flesh: but envy the rottenness of the bones.” – Proverbs 1:14,30.

Nothing gives Jesus greater joy than to see His people living by faith, we have all been there before, and if you were in the path of hurricane Matthew you witnessed how quickly your faith gets tried when storms come. Faith ensures that when the storms of life do come we as good grounded Christians can weather them with Jesus until they pass. As Jesus and the disciples take the ship over to the other side of the shore, a storm arose while He was asleep.

“And when they had sent away the multitude, they took him even as he was in the ship. And there were also with him other little ships. And there arose a great storm of wind, and the waves beat into the ship, so that it was now full. And he was in the hinder part of the ship, asleep on a pillow: and they awake him, and say unto him, Master, carest thou not that we perish? And he arose, and rebuked the wind, and said unto the sea, Peace, be still. And the wind ceased, and there was a great calm. And he said unto them, Why are ye so fearful? how is it that ye have no faith? And they feared exceedingly, and said one to another, What manner of man is this, that even the wind and the sea obey him?” – Mark 4:36-41.

“how is it that ye have no faith?” Let me tell you, if you think that Jesus does not know when we are in a storm think again, He knows exactly what was going on. Why do you think He laid there sleeping? He was looking for their faith. Now, no matter how good we are grounded in the Word of God we do lack faith at times, and while that does not mean we do not believe, it does mean we limit God’s ability to do even more for us though our faith. Jesus says that faith the size of a mustard seed can move mountains, imagine what faith the size of a mountain can do? “Jesus answered and said unto them, Verily I say unto you, If ye have faith, and doubt not, ye shall not only do this which is done to the fig tree, but also if ye shall say unto this mountain, Be thou removed, and be thou cast into the sea; it shall be done. And all things, whatsoever ye shall ask in prayer, believing, ye shall receive.” – Matthew 21:21-22.

“believing, ye shall receive.” Now, we must understand that God often answers prayers differently than the way we expect, a person who asks for healing may be brought to heaven, but they are still healed. You see, when God answers prayers He has our best interest in mind, where will we be best suited, and what glory He will get out of it. Do you know how many people get saved after they see someone miraculously healed? A few. Do you know how many people get saved through a tragedy or death? Many. We may not always like it, good grounded Christians are often used as a testimony and example that, through tragic circumstances, bring others to Him. “That the trial of your faith, being much more precious than of gold that perisheth, though it be tried with fire, might be found unto praise and honour and glory at the appearing of Jesus Christ:” – I Peter 1:7.

I understand that by faith we have great expectations of God answering our prayers as we ask them, and it can be disappointing when we are expecting certain things and get something different, but good grounded Christians learn that something even better is awaiting them as they keep praying by faith. A woman spent twelve years of her life trying to find a cure for an issue with her blood, if you are a woman you can understand what she must have been going through, she went to the best doctors, spent all her money, but only got worse. When she heard that Jesus was passing through town she just knew that if she could get close to Him she would be healed. There were so many people around Jesus, grabbing and touching Him, but not all of them touched Him believing, so He paid no mind to it, until He felt someone touch Him by faith.

“And a certain woman, which had an issue of blood twelve years, And had suffered many things of many physicians, and had spent all that she had, and was nothing bettered, but rather grew worse, When she had heard of Jesus, came in the press behind, and touched his garment. For she said, If I may touch but his clothes, I shall be whole. And straightway the fountain of her blood was dried up; and she felt in her body that she was healed of that plague. And Jesus, immediately knowing in himself that virtue had gone out of him, turned him about in the press, and said, Who touched my clothes? And his disciples said unto him, Thou seest the multitude thronging thee, and sayest thou, Who touched me? And he said unto her, Daughter, thy faith hath made thee whole; go in peace, and be whole of thy plague.” – Mark 5:25-31,34.

“Who touched my clothes?” Once the woman admitted she touched Jesus she was healed, Jesus knew who touched Him, He knows who are His, and delights in our faith, but we must be willing to admit that we believe in Him. It is not enough to read the Scriptures and believe Christ died for us, we must also confess that we personally believe that He is the only one who can help us. “That if thou shalt confess with thy mouth the Lord Jesus, and shalt believe in thine heart that God hath raised him from the dead, thou shalt be saved. For with the heart man believeth unto righteousness; and with the mouth confession is made unto salvation.” – Romans 10:9-10.

Jesus Christ Magnified: “And he arose, and rebuked the wind, and said unto the sea, Peace, be still. And the wind ceased, and there was a great calm.” – Mark 4:39.

Today’s Prayer: God, I know that sometimes I let my storms get the best of me and I lack the faith needed to get through them. You know what I am going through and what I need and all I need to do is call on You and You will show me what I need to do. Lord, I want to be grounded in Your Word, I do not want my heart to be filled with worldly things, but Your things so I can endure and weather the storms until they pass. Watch over me, guide me, and abide in me, give me peace, comfort, Your mercy and grace, keep me faithful in knowing that You are near and everything is going to be alright. I love You, Lord and ask this in Jesus; name. Amen.