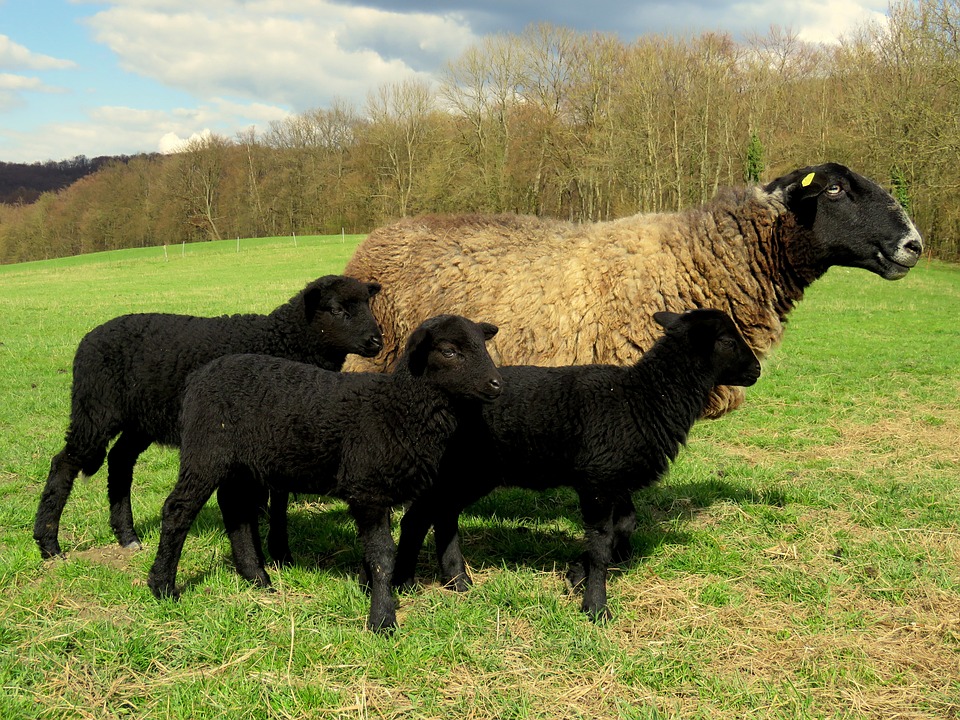 Black sheep are known to stand out, they are often one of a kind, peculiar, unique, and do not blend in with the world. Even before I was a Christian I was a black sheep, I did not fit in with the world and when I did try to be like it all it did was make me into someone I did not know, plus I was called out, they saw that I was not one of them. Let me tell you something, it is okay to be the black sheep, we do not need to try to prove to the world that we are somebody, God has made us who we are, we are precious to Him, and we are somebody to Him. “For thou hast possessed my reins: thou hast covered me in my mother’s womb. I will praise thee; for I am fearfully and wonderfully made: marvellous are thy works; and that my soul knoweth right well.” – Psalm 139:13-14.

Black sheep are not perfect, they have the same pressures as those in the world do, and they too make wrong decisions, perhaps out of fear or some other type of emotion, but because they are black sheep, it tends to get exposed more. II Chronicles goes into more detail about the reign of Rehoboam, first with the revolt of Israel. It did not take long before Rehoboam, desiring to be accepted by his friends as the new king, caused the entire nation to split when he vowed to oppress the people even more than his father did. Every tribe, except for Judah, rejected him, even claiming their namesake of Israel as well.

“So the king hearkened not unto the people: for the cause was of God, that the LORD might perform his word, which he spake by the hand of Ahijah the Shilonite to Jeroboam the son of Nebat. And when all Israel saw that the king would not hearken unto them, the people answered the king, saying, What portion have we in David? and we have none inheritance in the son of Jesse: every man to your tents, O Israel: and now, David, see to thine own house. So all Israel went to their tents. But as for the children of Israel that dwelt in the cities of Judah, Rehoboam reigned over them. Then king Rehoboam sent Hadoram that was over the tribute; and the children of Israel stoned him with stones, that he died. But king Rehoboam made speed to get him up to his chariot, to flee to Jerusalem. And Israel rebelled against the house of David unto this day.”

“What portion have we in David?” True Christians are the black sheep of the world, they stand out because they are faithful to Jesus, and the world does not take too kindly to them either. You can believe in God all you want, but to say you believe in a man who is born of a virgin, and died to save you from your sins, those are fighting words. The world will never accept Jesus because they will never accept that what they are doing is sin, but God allows all this for one reason, repentance. You see, Israel was already falling into the corruption of the world as Solomon allowed his wives to bring all their false gods and idols in with them, which is why God judged them and only left one tribe, well, actually two to stand by Rehoboam. Rehoboam was determined to fight Israel on this, but discovered that all it was all God’s doing, immediately he stopped.

“And when Rehoboam was come to Jerusalem, he gathered of the house of Judah and Benjamin an hundred and fourscore thousand chosen men, which were warriors, to fight against Israel, that he might bring the kingdom again to Rehoboam. But the word of the LORD came to Shemaiah the man of God, saying, Speak unto Rehoboam the son of Solomon, king of Judah, and to all Israel in Judah and Benjamin, saying, Thus saith the LORD, Ye shall not go up, nor fight against your brethren: return every man to his house: for this thing is done of me. And they obeyed the words of the LORD, and returned from going against Jeroboam.” – II Chronicles 11:1-4.

“for this thing is done of me.” Repentance; a change of mind, or a conversion from sin to God. True repentance is admitting that we have sinned, knowing there is a punishment for sin, which that is the second death and hell, understanding that Jesus paid the price for that punishment on the cross, and accepting that He alone is the only one who can save us from hell. The people of the Old Testament may not have seen Jesus or known that He would become the last sacrifice needed for true repentance, but they did know that salvation came solely upon their faith in the LORD. “What shall I render unto the LORD for all his benefits toward me? I will take the cup of salvation, and call upon the name of the LORD.” – Psalm 116:12-13.

Once a person comes to know Christ as their Saviour they stand out even more, if you thought you were the black sheep before you were saved, that was only the beginning once Christ starts working in your life. You no longer want to blend in with the world, so you start to search for other black sheep. When Jeroboam became king of Israel he decided to create his own gods, so priests, Levites, or anyone else who worshiped God had to do it in secret or risk being prosecuted. Not all of Israel accepted those false gods, if they could not worship God they went back to Jerusalem where they could worship Him freely.

“And the priests and the Levites that were in all Israel resorted to him out of all their coasts. For the Levites left their suburbs and their possession, and came to Judah and Jerusalem: for Jeroboam and his sons had cast them off from executing the priest’s office unto the LORD: And he ordained him priests for the high places, and for the devils, and for the calves which he had made. And after them out of all the tribes of Israel such as set their hearts to seek the LORD God of Israel came to Jerusalem, to sacrifice unto the LORD God of their fathers. So they strengthened the kingdom of Judah, and made Rehoboam the son of Solomon strong, three years: for three years they walked in the way of David and Solomon.” – II Chronicles 11:13-17.

“such as set their hearts to seek the LORD God of Israel came to Jerusalem,” Those whose hearts seek Christ want to go where He is, they hear His voice calling them, and gladly go where He leads them. “My sheep hear my voice, and I know them, and they follow me: And I give unto them eternal life; and they shall never perish, neither shall any man pluck them out of my hand. My Father, which gave them me, is greater than all; and no man is able to pluck them out of my Father’s hand.” – John 10:27-29.

Knowing Christ as our Saviour is a tremendous blessing, beside the fact that we will live eternally with Him, we also are provided for here, He showers us with love, protection, guidance, grace, and even prosperity. The issue with that is that the more prosperous we become the less we tend to rely on God to carry us through. We must realize that Christ is our strength, the one who makes us who we are, and keeps us from sin, without Him we will lose that strength. For the first few years Rehoboam did great, but when he got strong he supposed he had nothing to fear from Jeroboam, he took his eyes off God and so did Judah, resulting in God sending judgment.

“And it came to pass, when Rehoboam had established the kingdom, and had strengthened himself, he forsook the law of the LORD, and all Israel with him. And it came to pass, that in the fifth year of king Rehoboam Shishak king of Egypt came up against Jerusalem, because they had transgressed against the LORD, Then came Shemaiah the prophet to Rehoboam, and to the princes of Judah, that were gathered together to Jerusalem because of Shishak, and said unto them, Thus saith the LORD, Ye have forsaken me, and therefore have I also left you in the hand of Shishak. Whereupon the princes of Israel and the king humbled themselves; and they said, The LORD is righteous. And when the LORD saw that they humbled themselves, the word of the LORD came to Shemaiah, saying, They have humbled themselves; therefore I will not destroy them, but I will grant them some deliverance; and my wrath shall not be poured out upon Jerusalem by the hand of Shishak. Nevertheless they shall be his servants; that they may know my service, and the service of the kingdoms of the countries. So Shishak king of Egypt came up against Jerusalem, and took away the treasures of the house of the LORD, and the treasures of the king’s house; he took all: he carried away also the shields of gold which Solomon had made.” – II Chronicles 12:1-2,5-9.

“And when the LORD saw that they humbled themselves,” Once God saw them humble themselves that is when He stopped His judgment to destroy Judah, while He did not destroy them He did chasten them. Since we are the black sheep and stand out in this world, we must never lose sight of Christ, we are strengthened through Him, He is the one who makes us who we are, and keeps us from sin, without Him we will lose that strength. Let me tell you, while God will allow us to dangle on the edge of sin sometimes, He will never let us fall, and He will never let us forget that His grace is what kept us from getting what we really deserved. “Do ye think that the scripture saith in vain, The spirit that dwelleth in us lusteth to envy? But he giveth more grace. Wherefore he saith, God resisteth the proud, but giveth grace unto the humble. Submit yourselves therefore to God. Resist the devil, and he will flee from you.” – James 4:5-7.

Jesus Christ Magnified: Today, Jesus is revealed through Rehoboam, who humbled himself before God. Jesus, with all the power of God humbled Himself, becoming a servant giving all power to the Father. “Thou hast put all things in subjection under his feet. For in that he put all in subjection under him, he left nothing that is not put under him. But now we see not yet all things put under him. But we see Jesus, who was made a little lower than the angels for the suffering of death, crowned with glory and honour; that he by the grace of God should taste death for every man.” – Hebrews 2:8,9.

Today’s Prayer: Jesus, Thank you for your mercy and grace to save a sinner like me. I never fit in with the world, and I sure do not now since I come to know You as my Saviour. I know the world will never accept me, but that does not keep it from tempting me to want what it has. Lord, You are my strength, and as long as I stick close to You I know you can get me through everything. Lead me and guide me, keep me humble, fill me with Your love, mercy, and grace, help me withstand the temptations of the world and stay grounded on You. In Your name, Jesus, Amen.