KJB Daily Devotion – Following Jesus Through Every Chapter
Date: Saturday, May 14, 2016
Chapters: 2 Chronicles 27-29
Message: Prepare Your Way Before The LORD 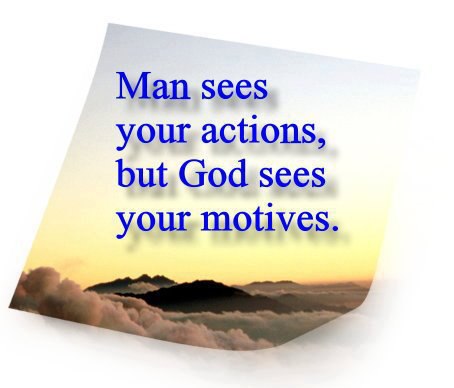 God grabbed my attention when I was praying this morning, He pointed out to me that while He has the power to do great things in my life, I limit His potential because of my doubts. You see, while we, who are saved and born again know everything is possible with God, it is not Him we doubt, it is ourselves. God wants to great things in your life, are you prepared to receive them, if not, you will not. “But as it is written, Eye hath not seen, nor ear heard, neither have entered into the heart of man, the things which God hath prepared for them that love him.” – 1 Corinthians 2:9.

We all have doubts, it is not God who places doubt in our minds, it is the devil. Do you know how many times a week the devil tries to make me doubt my salvation? I know I am saved, I know where I am going, but every time I think about my past, here comes that doubt. If I could kick the devil in the pants I would because all he does is put doubt in my mind. The thing is, we have this much higher standard that we place upon ourselves, we forget that we are not under the law of works, but of grace. We must get out of this mentality that God will never do anything good for us because of our past. In today’s reading we are going to take a look at three more kings. First, Jotham, he had to take over as king when his father Uzziah had become leprous for going into the temple and burning incense. Jotham was a good and godly king, he and Judah prospered greatly because He prepared his ways through God’s ways.

“And he did that which was right in the sight of the LORD, according to all that his father Uzziah did: howbeit he entered not into the temple of the LORD. And the people did yet corruptly. He built the high gate of the house of the LORD, and on the wall of Ophel he built much. Moreover he built cities in the mountains of Judah, and in the forests he built castles and towers. He fought also with the king of the Ammonites, and prevailed against them. And the children of Ammon gave him the same year an hundred talents of silver, and ten thousand measures of wheat, and ten thousand of barley. So much did the children of Ammon pay unto him, both the second year, and the third. So Jotham became mighty, because he prepared his ways before the LORD his God.” – 2 Chronicles 27:2-6.

“because he prepared his ways before the LORD his God.” Our ways are not God’s ways, they never have been and never will be. The key to Jotham’s success was not that he was perfect, it was because he did everything knowing that the LORD was his God. We will never be prefect until Christ returns or we are in heaven, but we do not have to be, we just have to know that the LORD us our God. The only way to know that the LORD is our God is by receiving His Son as our Saviour. “Whosoever transgresseth, and abideth not in the doctrine of Christ, hath not God. He that abideth in the doctrine of Christ, he hath both the Father and the Son.” – 2 John 1:9.

Now, we come to Ahaz, he was a mess, he not only forsook God, he worshiped every god he could find, even sacrificed his own children to these gods. Because he did not prepare his way for God, nether thought God as his, God put judgment upon him. “And Tilgathpilneser king of Assyria came unto him, and distressed him, but strengthened him not. For Ahaz took away a portion out of the house of the LORD, and out of the house of the king, and of the princes, and gave it unto the king of Assyria: but he helped him not. And in the time of his distress did he trespass yet more against the LORD: this is that king Ahaz. For he sacrificed unto the gods of Damascus, which smote him: and he said, Because the gods of the kings of Syria help them, therefore will I sacrifice to them, that they may help me. But they were the ruin of him, and of all Israel. And Ahaz gathered together the vessels of the house of God, and cut in pieces the vessels of the house of God, and shut up the doors of the house of the LORD, and he made him altars in every corner of Jerusalem. And in every several city of Judah he made high places to burn incense unto other gods, and provoked to anger the LORD God of his fathers.” – 2 Chronicles 28:20-25.

“and provoked to anger the LORD God of his fathers.” Those who are lost will follow any spirit, they know that something is wrong because their lives are a mess, but because they are lost they do not see God, even though He may be right in their face. I will tell you, I like many others knew of God, but He was not prominent in my life. I had no reason to make Him a part of my life because I thought God did not work that way. I will admit that I tried other spirits, and even said it was from God. It was not until I lost everything I had, and almost lost my life that I saw Jesus. If we say we believe in God and follow other gods all we do is make Him angry. You see, these old stories from the Bible have nothing to do with us following a bunch of commands that were meant for that time, they are meant to show us that He is merciful to those who love Him and gives all a chance to find it. “But ye are a chosen generation, a royal priesthood, an holy nation, a peculiar people; that ye should shew forth the praises of him who hath called you out of darkness into his marvellous light: Which in time past were not a people, but are now the people of God: which had not obtained mercy, but now have obtained mercy.” – 1 Peter 2:9,10.

As I have mentioned before, I am redesigning I’m Following Jesus, it amazing me how much I have learned from the word of God since I first put the site together in 2007 (all God’s glory there). For the life of me I could not understood why God had to spell out things that seems like common sense to us, but my goodness, there are some very disgusting and filthy people out there. Therefore, He has to spell every single thing out for us in order for us to know what is right and wrong. Now, we come to Hezekiah, he repaired and reopened the temple after his father boarded it up. He gathered the Levites together for their services and had them cleanse themselves to be able to fulfill their duties. He discovered something, those who were not priests were cleaner than the priests.

“Then Hezekiah answered and said, Now ye have consecrated yourselves unto the LORD, come near and bring sacrifices and thank offerings into the house of the LORD. And the congregation brought in sacrifices and thank offerings; and as many as were of a free heart burnt offerings. And the number of the burnt offerings, which the congregation brought, was threescore and ten bullocks, an hundred rams, and two hundred lambs: all these were for a burnt offering to the LORD. And the consecrated things were six hundred oxen and three thousand sheep. But the priests were too few, so that they could not flay all the burnt offerings: wherefore their brethren the Levites did help them, till the work was ended, and until the other priests had sanctified themselves: for the Levites were more upright in heart to sanctify themselves than the priests. And also the burnt offerings were in abundance, with the fat of the peace offerings, and the drink offerings for every burnt offering. So the service of the house of the LORD was set in order. And Hezekiah rejoiced, and all the people, that God had prepared the people: for the thing was done suddenly.” – 2 Chronicles 29:31-36.

“for the Levites were more upright in heart to sanctify themselves than the priests.” Since God created man, there have been more corrupt leaders in the church than in the congregation. Ministry leaders or not, there are things we ought to be doing that are common sense, we need to clean up after ourselves, the cleaner we are the more we prepare our way for God, and He will prepare us for what He has waiting for us. “Submit yourselves therefore to God. Resist the devil, and he will flee from you. Draw nigh to God, and he will draw nigh to you. Cleanse your hands, ye sinners; and purify your hearts, ye double minded. Be afflicted, and mourn, and weep: let your laughter be turned to mourning, and your joy to heaviness. Humble yourselves in the sight of the Lord, and he shall lift you up.” – James 4:7-10.

Jesus Christ Revealed: Today, Christ is revealed through Jotham who prepared his way for God. Jesus came to earth for one purpose, to become permanent redemption for man. He, though fully God, submitted to God, the Father, and prepared Himself in his ways for God. “I can of mine own self do nothing: as I hear, I judge: and my judgment is just; because I seek not mine own will, but the will of the Father which hath sent me.” – John 5:30.

Today’s Prayer: God, I know we all have flesh and are capable of falling into sin when our heart is not right with You. Lord, help me prepare my ways before You. Give me Your power, wisdom, and guidance to live in Your will. Give me the strength to stand by Your word at all times, let me not let the actions of a bad leader change my perception of You. In fact, let me be the holy example that You need me to be so that others would want to follow You Son. In Jesus’ name. Amen.