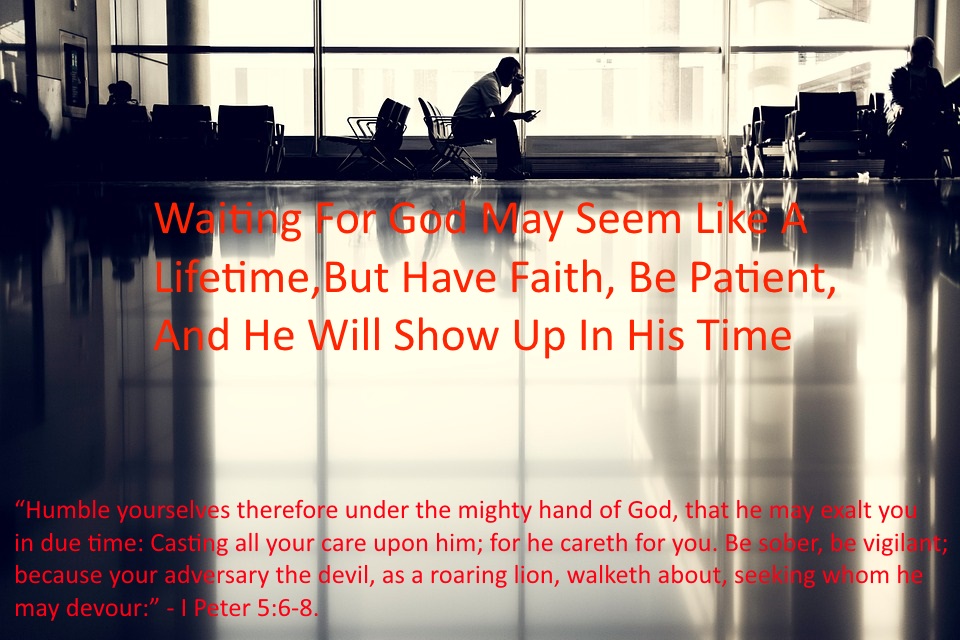 As you read through the Bible (now being under the law of grace), sometimes you have to wonder why God waited four thousand (approximately) years to send Jesus to save man after the fall of man. I imagine it was for the same reason He has not returned yet, to bring as many to repentance as possible. We like to think that we know God’s timing, and contrary to what some believe that one year is literally a thousand to God, we do not, it takes more than just faith, we need a lot of patience to see God bring things to pass. Some of us will see great things come to pass for our patience, while others will not, but that is what faith is for, we may not see God do something He says He will do in our lifetime on earth, but the best is yet to come.

“They were stoned, they were sawn asunder, were tempted, were slain with the sword: they wandered about in sheepskins and goatskins; being destitute, afflicted, tormented; (Of whom the world was not worthy:) they wandered in deserts, and in mountains, and in dens and caves of the earth. And these all, having obtained a good report through faith, received not the promise: God having provided some better thing for us, that they without us should not be made perfect.” – Hebrews 11:37-40.

“having obtained a good report through faith,” You see this, they were saved by their faith in the promises. While the law was given to the Israel as a guide to have a right relationship with God, it was their faith that mattered most, not obeying over six hundred commands. As Jesus traveled throughout Israel He saw their faith and it not only grieved Him, it angered Him as well, He saw more faith in the heathens than those who were supposed to know Him and begins to upbraid them.

“which art exalted unto heaven,” Religion has a great way of measuring people according to their works, they deceive people into believing if they follow “their” rules they get to go to heaven. Because of this people are dying and going to hell because they thought their righteousness saved them. You see, God’s righteousness is not the same as ours, of course, we learn right from wrong, but one rule broken will destroy all the good. It is like getting a bad review, it tarnishes you no matter how many good reviews you get. This is why Jesus came, to save those who admit they are sinners, if a person does not repent of thinking that their self righteousness is getting them to heaven, then they will face judgment too. Jesus made it simple, He became the sacrifice that allowed permanent atonement for those who admit they are sinners, Jesus explains this further.

“All things are delivered unto me of my Father: and no man knoweth the Son, but the Father; neither knoweth any man the Father, save the Son, and he to whomsoever the Son will reveal him. Come unto me, all ye that labour and are heavy laden, and I will give you rest. Take my yoke upon you, and learn of me; for I am meek and lowly in heart: and ye shall find rest unto your souls. For my yoke is easy, and my burden is light.” – Matthew 11:27-30.

“and he to whomsoever the Son will reveal him.” Until we know Christ as our Saviour, God does not know us. The second we believe and receive Christ, He reveals to God that we now belong to Him. From the start God knew that whether one command or a thousand, we mess up, and are incapable of being sin free at all times. He first instituted the blood sacrifices as a means for redemption to all who lived by faith and just wanted to get right with God, but Jesus made it possible for all who live by faith to have permanent redemption, He is what gives us rest from trying to measure up to God’s righteousness. “Neither by the blood of goats and calves, but by his own blood he entered in once into the holy place, having obtained eternal redemption for us. For if the blood of bulls and of goats, and the ashes of an heifer sprinkling the unclean, sanctifieth to the purifying of the flesh:” – Hebrews 9:12-13.

People are quick to throw Scripture in your face and tell you that this is what God says, but these are the same people who need to work on the very things they are preaching to you about. Jesus confronts the religious people, and calls them out for their idle words, not speaking the truth.

“But I say unto you, That every idle word that men shall speak, they shall give account thereof in the day of judgment. For by thy words thou shalt be justified, and by thy words thou shalt be condemned. Then certain of the scribes and of the Pharisees answered, saying, Master, we would see a sign from thee. But he answered and said unto them, An evil and adulterous generation seeketh after a sign; and there shall no sign be given to it, but the sign of the prophet Jonas: For as Jonas was three days and three nights in the whale’s belly; so shall the Son of man be three days and three nights in the heart of the earth. The men of Nineveh shall rise in judgment with this generation, and shall condemn it: because they repented at the preaching of Jonas; and, behold, a greater than Jonas is here.” – Matthew 12:36-41.

“An evil and adulterous generation seeketh after a sign;” A woman was asked why she kept watching the same films, she replied, “Because I know the end of the story.” In this life we have two choices for an ending that will ultimately be a sequel, believe in Christ and receive eternal life into the Kingdom of God or believe false religion and receive eternal death into the lake of fire. These people, the most religious, had Jesus right in front of their faces, they saw the miracles, the healing and casting out of demons, yet they never believed in or preached the truth about Him. Jesus gives an illustration as to why so many turn into haters instead of believers.

“When the unclean spirit is gone out of a man, he walketh through dry places, seeking rest, and findeth none. Then he saith, I will return into my house from whence I came out; and when he is come, he findeth it empty, swept, and garnished. Then goeth he, and taketh with himself seven other spirits more wicked than himself, and they enter in and dwell there: and the last state of that man is worse than the first. Even so shall it be also unto this wicked generation.” – Matthew 12:43-45.

“and the last state of that man is worse than the first.” If you ever wondered how a person could become so hateful of Christ after they were brought up in the church or followed Him, here is the reason. The unclean spirit is Satan and he dwells in every unsaved soul, he leaves them for a time in which they are exposed to Christ, and while they are not saved, they follow Him for a time. However, they never received Him so, when Satan returns, sees them all cleaned up and overtakes them through circumstances to not only get them away from Christ, but despise Him, becoming worse then they were. While the devil can afflict us whether or not we are saved, he can never take our soul if we are saved because it belongs to Jesus. We do not know why God takes so long to do some things, but we have to have faith in His promises, be patient, and as long as we are we will see them, even if we are in heaven to see them.

“Humble yourselves therefore under the mighty hand of God, that he may exalt you in due time: Casting all your care upon him; for he careth for you. Be sober, be vigilant; because your adversary the devil, as a roaring lion, walketh about, seeking whom he may devour:” – I Peter 5:6-8.

Today’s Prayer: God, Thank You for Your simple plan, You do not make us follow a bunch of rules that we have no way of keeping, You just want us to embrace You and let the Holy Spirit be our guide to live in a way that pleases You. I embrace Your gift of eternal life that You have given to be for believing in the finished word of Your Son on the cross. I may be weak, but Your Word is powerful to fight off the temptation to sin and reassure me that You are with me even when others may forsake me. I can do this because I know that Christ, who lives in me gives me the strength to do so. In Jesus’ name. Amen.

A Fool For Christ A Humble Spirit and the deceitfulness of riches Be A New Lump Bearing Temptation Being The Black Sheep Be Ready For Christ’s Return Boldly Preach The Gospel Bought And Paid For But Not Forsaken By Faith By The Mercies Of God choke the word Complete In Christ Contending With God Dedicated To God Enduring Tribulation Faith And Faithfulness Faithful Christians For The Glory Of God For The Love Of Christ For The Love Of God Getting God’s Attention Holding On To Integrity It Is Not Science Jesus Justified By Faith Maintaining Good Works prayer Set Apart For God some sixty Stand By Your Faith The Destruction Of Pride The Effectual Fervent Prayer The Kingdom of Heaven The Mark Of Christ The Prayer Of Faith The Trial Of Your Faith True Wealth trust Walking With Jesus When Mercy Runs Out Where is Your Faith? Who Did Hinder You? You Are Chosen