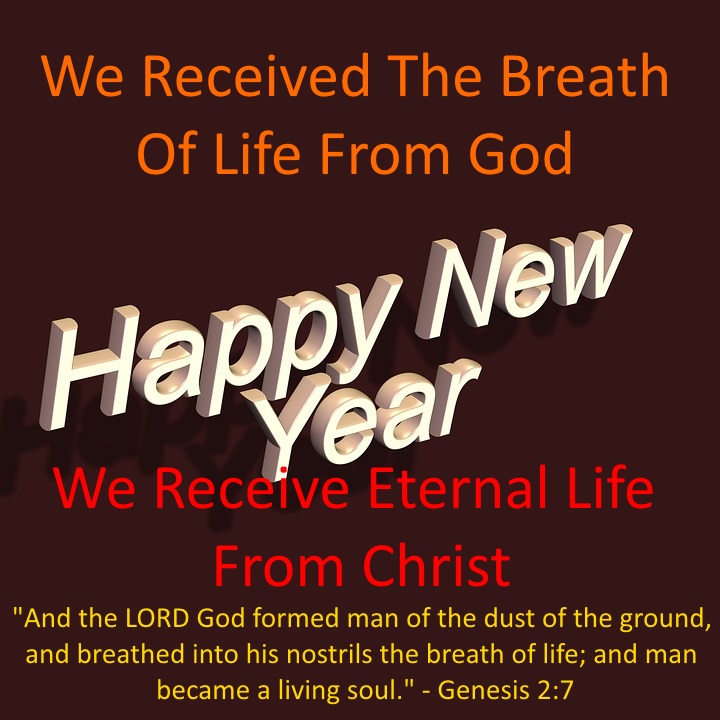 The Book of Genesis, known as the book of origins of the beginning of life, and of ruin through sin, was penned by Moses approximately between 1445-1405BC, the timeline for these events took place approximately between 4004-1406 BC. The purpose of the book was to preserve the historical background of Israel and record the beginning of creation, sin, redemption, and how God deals with man. What we are to learn from the book is that God is the Creator of all things, and His plan from the beginning included all nations, not just Israel. “And I will make thy seed to multiply as the stars of heaven, and will give unto thy seed all these countries; and in thy seed shall all the nations of the earth be blessed;” – Genesis 26:4.

Happy 2017! Since this is an odd number year, and one that ends with seven I imagine it is going to be a pretty interesting year. As I read the chapters this morning I could not help, but think new year, new beginning, new challenges, and resolutions. I normally do not make resolutions because I know my flesh and never get past the first month, but I also know my God and His endless mercies and grace. God used Moses to pen down what He wanted us to know about creation well before he existed, but God knew it was necessary that man know exactly where they came from as well as everything else on the earth. Just like we have a beginning, so did the earth and in six twenty-four hour days, God created the entire earth.

“And the Spirit of God moved upon the face of the waters.” The Spirit of God is life, without His Spirit there is no life beyond this life. Everything from the grass to man has been created by God after its own kind, that means nothing that has life to it has been formed by something else. Do not confuse a different breed within a specie with a different specie all together, cattle cannot mate with dogs, fish cannot mate with shellfish, people cannot mate with animals. God paid particular attention to man, creating us in His very own image, and unlike the rest of His creation He made man with a soul, we are the only specie to not only be able to communicate with God, but also able to live eternally with Him through His Spirit. Notice the words, “Let us,” this is God speaking in the form of His three persons, the Father, the Son (the Word), and the Holy Spirit, we need all three to have His Spirit in us. “For there are three that bear record in heaven, the Father, the Word, and the Holy Ghost: and these three are one. And there are three that bear witness in earth, the Spirit, and the water, and the blood: and these three agree in one. And this is the record, that God hath given to us eternal life, and this life is in his Son. He that hath the Son hath life; and he that hath not the Son of God hath not life.” – I John 5:7-8,11-12.

I always say, that even if it were possible that life itself formed from one spec someone had create the spec. God goes into further detail of how He created man, we all started as, well dirt, and talk about a spec. God breathed into the nostrils of a lifeless mold of dirt and in an instant, a living soul was given to man.

“These are the generations of the heavens and of the earth when they were created, in the day that the LORD God made the earth and the heavens, And every plant of the field before it was in the earth, and every herb of the field before it grew: for the LORD God had not caused it to rain upon the earth, and there was not a man to till the ground. But there went up a mist from the earth, and watered the whole face of the ground. And the LORD God formed man of the dust of the ground, and breathed into his nostrils the breath of life; and man became a living soul. And the LORD God commanded the man, saying, Of every tree of the garden thou mayest freely eat: But of the tree of the knowledge of good and evil, thou shalt not eat of it: for in the day that thou eatest thereof thou shalt surely die. And the LORD God caused a deep sleep to fall upon Adam, and he slept: and he took one of his ribs, and closed up the flesh instead thereof; And the rib, which the LORD God had taken from man, made he a woman, and brought her unto the man.” – Genesis 2:4-7,16-17,21-22.

“for in the day that thou eatest thereof thou shalt surely die.” Obviously Adam did not know what death meant, they were like brand new children at this point, and only had God to teach them things. When we first come to the knowledge of God, we are like everyone else, eager to win His attention, a bit scared because we are mainly taught that if we disobey Him we will die, but until we truly understand what that death is we are oblivious to it. There was someone else who showed up on earth, actually he was cast out of heaven for trying to take it from God, and decided he was going to get even with God and mess with His most precious creation, man. Only, he did things subtly, speaking through, of all things, a snake, he influenced the woman and she did eat of the tree.

“And when the woman saw that the tree was good for food, and that it was pleasant to the eyes, and a tree to be desired to make one wise, she took of the fruit thereof, and did eat, and gave also unto her husband with her; and he did eat. And the eyes of them both were opened, and they knew that they were naked; and they sewed fig leaves together, and made themselves aprons. And they heard the voice of the LORD God walking in the garden in the cool of the day: and Adam and his wife hid themselves from the presence of the LORD God amongst the trees of the garden. And the LORD God called unto Adam, and said unto him, Where art thou? And he said, I heard thy voice in the garden, and I was afraid, because I was naked; and I hid myself. And he said, Who told thee that thou wast naked? Hast thou eaten of the tree, whereof I commanded thee that thou shouldest not eat? And the man said, The woman whom thou gavest to be with me, she gave me of the tree, and I did eat. And the LORD God said unto the woman, What is this that thou hast done? And the woman said, The serpent beguiled me, and I did eat.” – Genesis 3:6-13.

“and Adam and his wife hid themselves” You cannot hide from God, and He already knew what they had done, but their behavior made it worse. What Adam and Eve really found by going against God was guilt, then they tried to blame someone else. This is proof that being ignorant to sin does not save you, neither does putting the blame on someone else, we are responsible for our own actions. Adam and Eve did die that day just like God said, but it was not physically, it was spiritually, meaning He took His Spirit from their souls, not only that, they lost direct communication with God, His trust, Eve was no longer considered equal to Adam, and would endure so much pain as a woman, Adam had to endure much physical labor just to put food on the table. And since we are all directly linked to Adam and Eve, we too are born the same, all, but Jesus has the same Father, Adam. We truly never understand the impact sin has on our lives until we commit the act, by by then it is too late. Even though God took away His Spirit, He still had mercy on them, He could have put an end to man right there, and He certainly could have destroyed Satan, but He had a plan, He was going to make a way for those who truly wanted Him in their lives to not only receive His Spirit, but live with Him for eternity, and that was His Son. “For since by man came death, by man came also the resurrection of the dead. For as in Adam all die, even so in Christ shall all be made alive.” – I Corinthians 15:21-22.

Jesus Christ Magnified: “And I will put enmity between thee and the woman, and between thy seed and her seed; it shall bruise thy head, and thou shalt bruise his heel.” – Genesis 3:15.

Today’s Prayer: God, Thank You for endings and new beginnings, for the hope of eternal life and giving us Your truths to live by. Without Your Son there is no life, but with You we can see the Light and a great year ahead. Lord, watch over us, guide us, and help us walk in the Light throughout 2017, give us Your mercies, grace, and hope for a great and prosperous year. Remind us how fortunate we are to know Your Son, and never let us forget that while everything You make is good, it is not all good for us. In Jesus’ name. Amen.